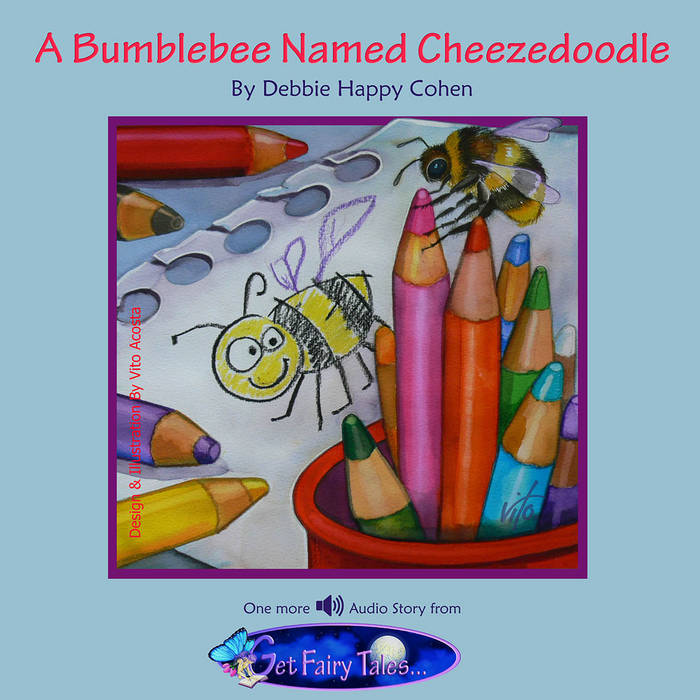 Once upon a time, there lived a little bumblebee who had a very big problem . . .

She also did not like pollen, because it made her sneeze.

So you see, this was NOT a good situation for Cheezedoodle, because most people know that bees need nectar in order to survive . . .

And bees need to scoop up pollen and carry it from one flower to another in order for plants to bear fruit.

Not only that, but because Cheezedoodle avoided flowers, she could not make honey, and this meant she could not join the rest of the bees in doing their work.

And, maybe you’ve guessed by now, but her name was Cheezedoodle because that is the only thing she loved to eat!

Have you ever heard of such a thing, a bee who eats Cheezedoodles?!
You’re probably wondering, “Where did she find such a strange treat?”

Well, she'd regularly find them on plates of leftovers belonging to Tommy, a little boy who lived on the third floor of a nearby apartment building.

Cheezedoodle would wait every day for Tommy to leave his plate on the table near the window, and once he’d gone, she would fly on over and eat any of the remaining bright, beautiful orange Cheezedoodle crumbs.

Oh, how she loved them! And she would finish them off with a few dainty sips of water. Then she would burp, just a little. (Now really, who ever heard of a burping bee? Not me, I tell you! Certainly, not me!)

Well, Tommy happened to be a very observant child. He liked to draw and paint, and he read books that stretched his imagination. But when he first saw a little bee sitting on his plate eating his Cheezedoodle crumbs, he thought maybe he was imagining things . . . or maybe he was dreaming!

But no, there she was, actually picking up bright orange crumbs with her front feet and placing them in her tiny mouth!

Very quietly, then, Tommy snuck to the back of the room, so as not to startle her, and sat on a soft chair while he drew a wonderful portrait of her. Underneath the picture, Tommy wrote the name he decided to give her: “Cheezedoodle.”

Looking back up from the portrait he’d just made, he noticed – really? Could it be? Was she staring at him?

Tommy stood up and moved a few steps to the left. Her head and eyes followed him.

He moved slowly to a few other places in the room, and she continued to turn toward him.

Cheezedoodle had learned from her family that humans did not like bees and would whack at them for most any reason at all, so she tried to keep her eyes on this one.

Finally, Tommy moved closer to her. Cheezedoodle stepped back, but tripped over a small piece of rice. Ooops!

Tommy said, “Don’t worry, Cheezedoodle, I won’t hurt you.” His voice was soothing, and without meaning to, she leaned toward him.

Tommy slowly moved his hand toward her, and stuck his index finger out, as an invitation for Cheezedoodle to step up onto it.

However, Cheezedoodle got scared and flew straight out the window!
The very next day, though, she came back in through the window, and Tommy was sure to leave Cheezedoodle her favorite snack.

They went through the same routine as the day before, but this time, instead of flying away, she decided to take a chance and stayed on the plate.