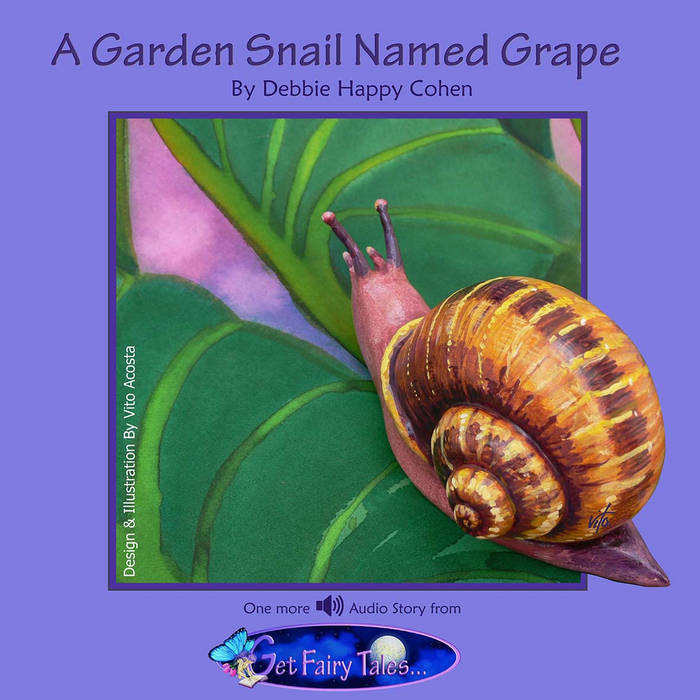 A story about love, imagination and taking flight.

Once upon a time, a small brown garden snail named Grape decided to take his morning crawl. He lived in a neighborhood of tree-lined streets, manicured rose bushes, pretty houses, and nice shiny cars.

From his home at the end of the block, he loved to climb the furthest branch on the tree in front of the house, and stretch his neck to be able to see all the way down the street. Every day, the view looked like a new piece of art, depending on the position of the sun and the clouds, and whether or not it had rained in the night.

As each season changed, Grape loved to experience the different smells and colors, and he even enjoyed how each season brought a different sensation to his skin. He was most definitely an outdoor snail!

His wife, Martha, on the other hand, was more of a snuggly snail who preferred to spend her mornings cuddled up in the planter on the front porch where they lived. And so on this particular springtime day, as I began to tell you, while admiring the morning from his tree branch, Grape smelled something fishy. Really fishy. And I mean stinky fishy. The kind of stinky fishy that this pretty neighborhood had never, ever experienced.

Grape scampered as quickly as he could down the tree, but, he is a snail, so by the time he reached their planter, Martha wasn’t there.

He called her name, “Martha! Martha!” and he whistled their whistle. Quiet was all he heard.

He was so concerned that he forgot all about the fish stink in the air. Hmmm . . . what should he do? Grape stayed very still and thought of Martha and how much he loved her. His heart swelled, and he asked his heart softly, “Martha, where are you?”

Just then, three boys came running down the sidewalk in front of Grape’s house. And then cars started driving hurriedly in the same direction. And then more girls and boys ran by. This was definitely not typical behavior for his neighborhood.

Something was fishy. But where in the world was Martha, Grape wondered. She must have gone in the same direction with everyone else. She must have found something out, and he wanted to be there with her.

(listen to the story to hear the rest...)